For the past year, Adam has been volunteering with PAPYRUS in the West Midlands. In this PAPYRUS blog, Adam discusses why he began volunteering and the importance of listening.

It’s hard to believe that it’s been a year since my best friend took his own life. It has also been a year since I started working as a volunteer with PAPYRUS in the West Midlands. The two things are inextricably linked in my mind. My friend’s death made me stop and look at a lot of things in life and get a new perspective. It also gave me the motivation to volunteer in the field of suicide prevention, as I felt there was still a lot of misinformation and reluctance to speak about suicide. If society can’t talk about an issue properly then it is never going to be able to work to improve it, so I wanted to do my bit in my community to help start an informed conversation. Since I have started doing this work it is incredible how many people I have met whose lives have been touched by suicide. You don’t know just how many people are out there until you start talking yourself.

I considered for a while which organisation to join as there are a number of different charities that do work in mental health. I chose PAPYRUS as it is unique in being the only national charity dedicated to suicide prevention for young people. However it also has lots of regional branches and each one has a personal feel. I really like the fact that all the work I have done is rooted in my local community.

My work with PAPYRUS has been varied and interesting. Firstly, I have enjoyed being part of the West Midlands Forum, which meets to plan awareness raising events in the area; at student fresher fairs, community festivals and many others. I then undertook some training on the facts around suicide and how to sensitively discuss it, which led to me becoming a PAPYRUS Champion. This means I can go into places in my community and give talks on suicide awareness. In fact, my personal highlight of this year was giving a talk to a group of Sixth Formers at a school in Wolverhampton. I know the school well and I got a lot out of delivering this important message to them. 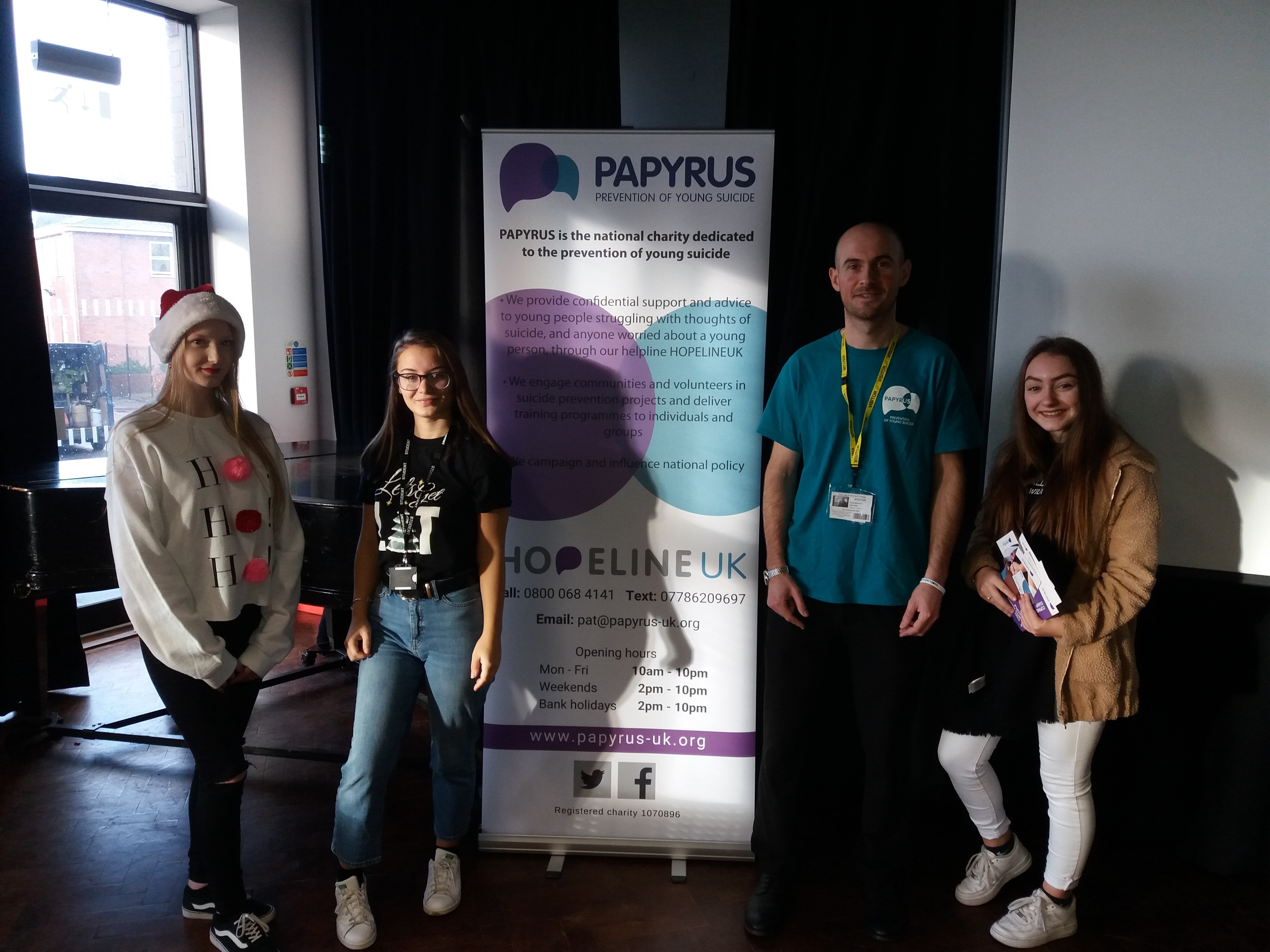 Adam with students from a school in Wolverhampton.

My time with PAPYRUS has been very rewarding and I look forward to doing more. I have met lots of new and interesting people. I have had some experiences that I won’t forget – manning a stall at an event in Walsall I saw the mayor share a stage with a local heavy metal band. Together they drew in a crowd of shoppers to listen to their message on mental health. I have improved my own skills in many areas. I have become a more effective speaker through the many conversations that I have had, but most of all I have learnt the importance of listening. It’s a skill that is underestimated. To really listen asks a lot of the listener. You need to put your own anxieties and prejudices aside, put aside what you are trying to say and really hear the other person’s message. I suppose this fits into what I was saying about starting a conversation on suicide prevention. You can’t do any of that without listening!