This October, we’ve seen an entire month of HOPEWALKs – we asked you to head outdoors, using whichever route you’ve chosen, and help raise awareness of suicide prevention. There were many different walks. From short strolls around your local park to huge community walks – each and every one has contributed to HOPEWALK18 and helped to smash the stigma around suicide.

PAPYRUS Trustee Sarah Fitchett has been taking part for several years. In 2018, alongside a huge group of walkers (243 in total!) she headed out for her fifth HOPEWALK in memory of her son, Ben Fitchett. Here is Sarah’s account of the day…

We began planning for our HOPEWALK back in October 2017 when we decided this year’s base would be the North Star pub. This means a lot to us as it’s the pub we did our first HOPEWALK from. We are back where we started 5 years ago.

The scale of the walk was huge! In total, we had 42 teams and 243 walkers who took part. Many of the walkers were from our home community of High Crompton.

Every walker donated £5 to PAPYRUS – this meant that every walker funded a twenty minute phonecall to HOPELINEUK! We walked a variety of distances. Some Scouting groups embarked on a 20 mile walk. In the meantime scouts, cubs, brownies, guides and the rest of the community walked 5 and 10 mile routes. On top of this, there were occasional longer routes for those who went “off track”. One consistency across all the walks was sharing the idea that #ItsOKtonotbeOK. We made sure we gave permission to our young people, alongside everyone else, to talk, to share how they are feeling and to say ‘I’m not OK’ if they need to.

Although we were mostly walking, it was actually a high-tech endeavour. The walk boasted a “Hike Control” with computerised check-ins at several pubs along the route. We had a car team ready to go out and support walkers if they felt they were no longer able to continue. Walkers were set off in timed intervals and the walk was seen as a personal challenge of mileage and map reading skills.

We even had a ‘sweep team’ who walked the route last to ensure that there were no lost walkers along the route and removing our pre-placed direction signs as they walked. 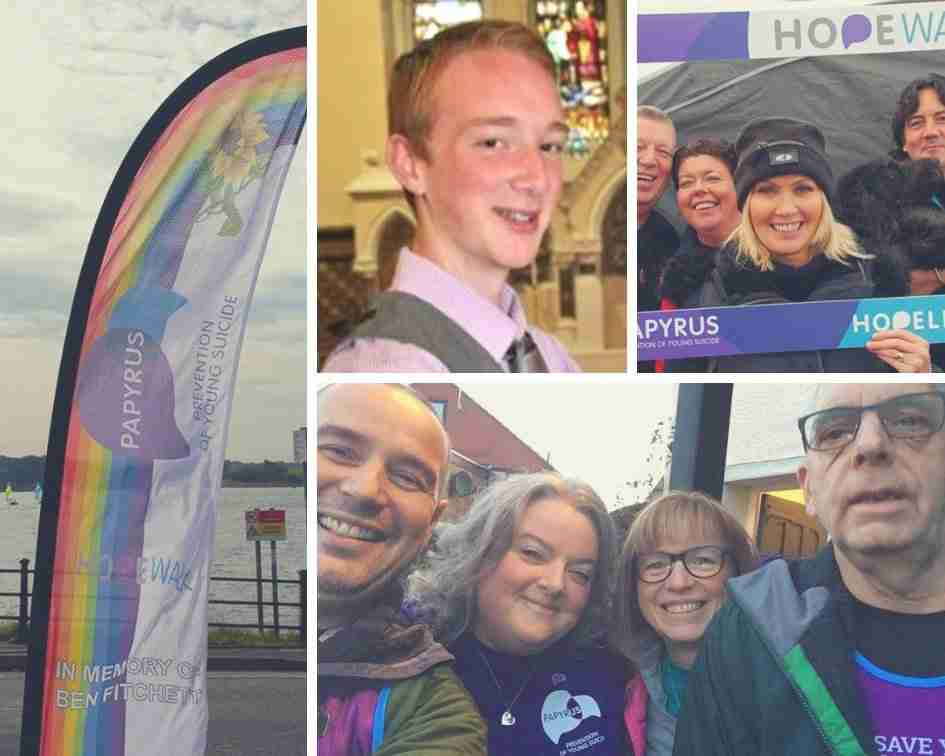 Our walk was well supported by the Scouting and Masonic fraternities alongside our church community who were manning our checkpoints. Rochdale Masonic Social Committee presented a cheque for £250 for PAPYRUS on the day. We have raised £2560 to date which, we are proud to say, can support HOPELINEUK to answer 512 phone calls.

After walking, back at the North Star pub, we hosted a variety of activities: a home bake sale, sweet stall, grand raffle, name the bear, nail painting, face painting, balloon release and had a PAPYRUS stall with cards and leaflets. Walkers and helpers were then rewarded with a portion of potato pie which had been generously donated by the pub and a member of the community. Many walkers enjoyed a cold, refreshing pint as a reward for finishing.

To close the event for another year we held a balloon release and used this moment to remember all our angels – especially those we have lost to suicide.

The final mention has to go to those we’ve lost, those who had brought us together to walk. And for me, my thoughts turn to Ben, an angel lost to suicide. As long as people come together Ben will be remembered forever in our hearts and our souls and will never be far from our thoughts. It meant a lot to be joined by Ben’s friends/buddies/besties – we were so glad they could join up with the walk (many of them made trips home from university to do so).

As we ponder the success of our 5-year anniversary walk we wish Love and Light to you all. We also reflect that we have an amazing community here in High Crompton.