Over 200 schoolchildren are lost to suicide every year in the UK.

But we don’t talk about suicide in schoolchildren – and the number of children in this level of emotional distress. Statistics (in England and Wales) were only released for the 10-14 age group for the first time in 2015. Suicides by children under 10 are not included in official statistics.

While there have been moves to prioritise the emotional health and mental wellbeing of children in schools, far fewer people are talking about suicide prevention. The stigma, silence and misconceptions around suicide mean that it is often not part of our normal conversation, and there is insufficient action to make suicide prevention training a priority for all who work with children and young people.

Schoolchildren spend the majority of their waking hours at school: teachers and school staff have the opportunity to recognise the signs that a student might be at risk of suicide and they are best placed to respond effectively. Despite this, many are unsure of what to do or to say. Indeed, many are frightened that they may make things worse by talking to their pupils about suicide. There is currently very little guidance for schools and colleges on how to prevent suicide and support those affected by it.

From calls to our helpline HOPELINEUK, and from our work in the community, we know that many teachers and school staff do not feel equipped to support schoolchildren at risk. This can be exacerbated by a lack of resources and having to work with mental health services which are often overstretched.

A 2017 survey, commissioned by PAPYRUS, found that one in ten (11%) of teachers said, on average, a student shares suicidal thoughts with them once a term or more. Yet our survey also identified a real need for support and training in the sector.

Building Suicide-Safer Schools and Colleges: A Guide for Teachers and Staff

PAPYRUS has developed a guide to suicide prevention, intervention and postvention in schools and colleges, aimed specifically at teachers as well as school or college staff. It aims to equip teachers with the skills and knowledge necessary to support schoolchildren who may be having suicidal thoughts.

Our guide uses a ‘community-model’ – supporting the belief that suicide is everyone’s business and that the community must be equipped and supported to prevent young suicide – as well as urging children young people to speak up or ask for help. This underpins our work here at PAPYRUS.

Have you used our guide? Are there other materials you’d like from PAPYRUS? We’d love to hear from you!

Our #SaveTheClass campaign continues to run and we are keen to hear feedback and see the development of materials to support schools as a key part of this. We have trained a number of school and college staff recently in ASIST; we aim to use their experience as case studies throughout the year.

Please send us your feedback on our guide – we can use it in subsequent stages for our campaign. Drop us an email on admin@papyrus-uk.org with ‘Schools Guide Feedback’ as the subject line.

Background on Our #SaveTheClass Campaign

In 2017 on World Suicide Prevention Day we launched an ongoing campaign to #SaveTheClass. Our school photo visually represents the lives of schoolchildren lost to suicide every year in the UK.

We’ve had feedback from many members and supporters that they would like to support our #SaveTheClass campaign further by sharing our guide for use as a resource in local schools or colleges. We advise that headteachers and governors are often a first port-of-call – you could ask them whether they have a suicide-safer schools policy in place.

They may then hand this concern over to Special Educational Needs Co-ordinators (SENCO), Pastoral Care Staff, Learning Mentors or Safeguarding Leads at their schools and ask them to implement a suicide prevention policy. Of course, if you are already involved in a school community, you may be able to approach these staff members directly. It’s worth noting that our guide uses a ‘Community Model’ and that we believe suicide prevention is everyone’s business, particularly in a school community. With this in mind, it may help to enlist the help of others – parents, teachers etc. – to start a conversation with decision-makers in the school or college.

It may well be that there is some resistance to discussing suicide in the school environment. This in itself can be a good opportunity to look at what is stopping us talking openly about suicide. Often, it is the fear of making things worse. This is very common but is unfounded. We really need to talk about suicide safety. The guide really helps to start that very conversation and equips you and your community to be suicide-safer and better prepared to support children who may be distressed and feeling hopeless.

If you are interested in training school or college staff in suicide prevention skills, please email training@papyrus-uk.org for more information. 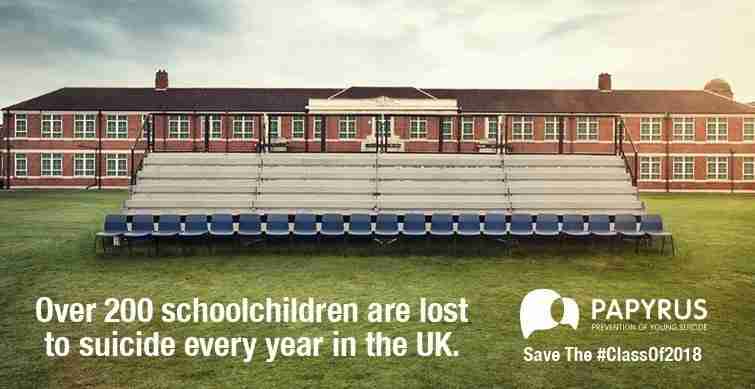