Four brothers who compete in Autograss motor racing events across the UK are showing their support for PAPYRUS Prevention of Young Suicide.

The Doddridge family from Caldicot in South Wales have added our charity’s logo and helpline number to their cars to increase awareness of suicide prevention and promote the support which is available.

Brothers Chris, 27, Matthew, 25, Joe 20 and Sam who is 17 all compete in what is one of the most popular forms of amateur motor racing.

Dad Ian Doddridge, who lost his own father to suicide when he was a teenager, says the family wants race fans to know that help is available.

“We are one of the lucky families. We’d see the signs and know what to do if one of us was in a bad place. Sadly, not everybody knows that support is out there.

“Just seeing how many young people think suicide is the only way out breaks our hearts. We are determined to raise awareness of the fantastic work PAPYRUS does and at every race we’ll be doing all we can to spread the word that many suicides can be prevented,” said Ian.

The brothers compete at numerous club meetings. This year Chris, Joe and Sam are taking part in the British Autograss Series. Joe, who races a modified Mini pick-up in Class 5, has made it through to this year’s Men’s National Autograss Championship in York.

Kate Heneghan, PAPYRUS’ Head in Wales, said: “The Doddridge family feel passionate about the sport of Autograss racing which takes them all over the UK.

“To take that passion and use it to help others is remarkable. We’d like to say a big thank you to dad, mum and all four brothers for reaching out to motor racing fans in such a colourful, dynamic and powerful way.

“It’s really important we reach as many young people as we can and all work together to give hope to those who are struggling with life.” 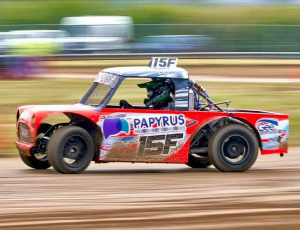