The following article is the transcript of a presentation given by Alex (age 14) to her Year 10 English GCSE class. Suicide prevention is a topic that Alex feels so passionate about and this article perfectly outlines how suicide prevention is everyone’s business and how we can all do more to break the stigma surrounding suicide.

By the time I have finished speaking, around 7 people will have died by suicide in the world. This is seven out of the nearly million people who kill themselves globally every year, and the sheer size of this number is one of the reasons why I have chosen this topic. Suicide is an extremely taboo subject, and is not spoken about nearly enough, which causes those who are suicidal to believe that they are alone in the way they feel. Suicide is preventable, and we as a society need to do more to stop it from happening.

Every so often we get a shock in the news when we learn that some famous celebrity has taken their own life, like Kate Spade in 2018 or Chester Bennington in 2017, but do we ever really think about why? Pressure from society to look perfect, seem perfect and be perfect means that people who are struggling believe they can’t open up for fear of judgement, and this concept can be fatal. We live in a world where shame, stigma and a lack of understanding kills so many, and it is up to us to change this. Even if their stories don’t make it to the news, millions of people are affected by suicide. Millions of people whose only wish is that they could change the past and learn the signs before they appeared, which they could have done were it not for the stigma around the subject. Millions of people who will forever wonder if there was anything they could have done, if it was their fault. Millions of people who will always know the pain and grief of losing a loved one to suicide. Our sons, daughters brothers, sisters, friends, classmates are in so much pain that they want to stop living, and yet barely anyone does anything about it. Together we need to learn and teach. We need to know how to support a loved one who is struggling, we need to know that grades don’t take precedence over mental health. We need to know how to use social media in a positive way for encouragement and kind messages instead of for putting each other down. We need to know that suicide is preventable – and just how we can prevent it.

Did you know that suicide is the biggest killer of young people, and that every year over 200 schoolchildren take their own lives in the UK? The rate of deaths in England has increased by 23.7% in under 25s, and 26.8% of people aged 16-24 have had suicidal thoughts. There are so many different causes for suicide or attempted suicide, but feelings of isolation and loss of relationships, money, connection or self worth are key factors. The UK has one of the highest rates of self harm in Europe and up to 725,000 people have an eating disorder, and these things alone drastically increase suicide risk.

Unfortunately, there are lots of myths and stigma surrounding the subject of suicide. For example, in 2016, 1 in 4 people believed that just talking about it would make someone more likely to take their own life. This is completely untrue, and actually talking about suicide to someone you are worried about is probably one of the best things you can do, as long as it is in a supportive way. It gives the person an opening to explain how they are feeling, and reminds them that it is okay to feel this way, and that can be a huge relief.

Some people also believe that suicide and self harm are cries for attention which shouldn’t be taken seriously, but this mindset is massively dangerous and leads to a person feeling more ostracised than ever. Suicidal feelings should always be taken seriously no matter what. One way we can help is by avoiding the term ‘committed suicide’ as it implies a criminal act or sin. This is important because it can lead to people who are suicidal thinking that they are in the wrong, and could lose their jobs, relationships and respect if they open up. Contrary to some beliefs, suicide is not at all selfish or malicious, but is people who are struggling being overwhelmed with suffering and fear. Mostly, they don’t actually want to die, they just want to end the pain.

So now who do you think is responsible for suicide prevention? Doctors and nurses, or mental health professionals, or therapists and psychologists? No. It is everyone. To save lives, we have to break the stigma surrounding suicide, and talk about it. We have to check in on our loved ones, pay attention to the people around you, take online courses like Zero Suicide Alliance to learn more, and tell someone if you’re worried. You also need to remember that if you’re struggling yourself to ask for help and don’t keep it all bottled up inside. Reach out. There is always someone who can and will help you. Suicide is caused by a sense of loneliness and lack of belonging, so bring people together. Raise awareness, recognise warning signs, and don’t be afraid to sit down and talk. Suicide is preventable and together we can prevent it.

Hearing young people themselves talking about the importance of suicide prevention is so encouraging and we applaud the work that Alex has done to raise awareness of this challenging topic amongst her peers. Well done Alex. 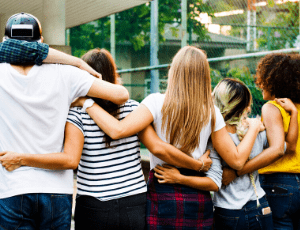