Pets are such an integral and important part of people’s lives. Often, they are not seen as pets but instead, a member of the family. Pets come in all shapes and sizes – from a goldfish to a Golden Retriever – yet their size does not determine their significance to our lives and the positive impact they can have on our emotional wellbeing.

As it is National Pet Month, we want to reflect on their significance in keeping people safe from acting on their thoughts of suicide. We also want to consider how they can generally improve our emotional wellbeing.

There are many ways in which pets can support an individual with their thoughts of suicide. Pets can offer company for those feeling lonely by acting as a companion – studies have shown that stroking pets actually lowers a person’s blood pressure and their heart rate, as well as relaxing a person’s muscles and making their breathing become more regular. Similarly, walking dogs is not only useful in getting people out to exercise, it often leads to people conversing with other pet owners, as well as getting much needed fresh air when people are struggling with thoughts of suicide. People with pets develop a structured routine – this supports people in keeping themselves occupied and distracted when life has become overwhelming.

There have been many studies which highlight the positive correlation between owning a pet and mental health. For example, a study conducted by ‘Cats Protection’ and ‘Mental Health Foundation’ have found that 87% of those who owned pets, specifically cats, noticed the positive impact that it had on their emotional wellbeing. Additionally, 76% felt that having their cats enabled them to cope much better with everyday life.

These findings support exactly what we hear on HOPELINEUK. For many callers, their pet is something that is keeping them safe – it is owning a pet which connects them to life – hence their importance. Frequently, there are occasions when people also incorporate pets into their plan to keep safe from suicide.

In summary, our furry companions are a part of the family and our best friends, but sometimes it can be even more than that – sometimes, pets are the things that are keeping us safe and well.

In honour of National Pet Month PAPYRUS staff have shared photos of their furry friends: 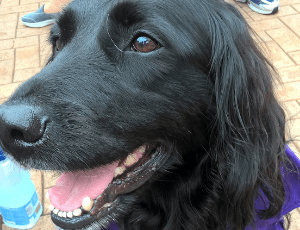