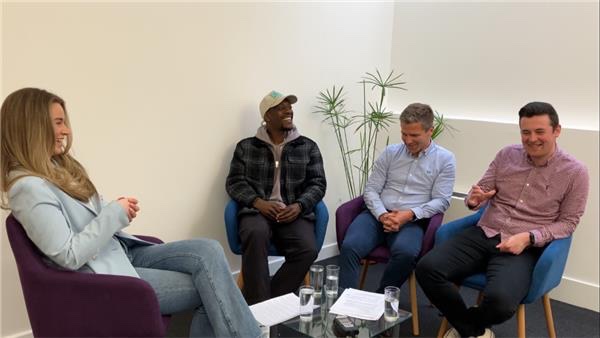 To mark the start of the 22/23 football season, PAPYRUS has launched a special podcast series HOPECAST: Extra Time.

Sport and football especially, are at the heart of culture, we often talk about players, managers and tactics… But we rarely talk about the serious issues that are linked to sport.

In this special three-part series, we explore gambling, LGBTQ+ representation and racism speaking to some insightful guests from the world of sport with lived experience of suicide.

Episode one: Gambling and sport

Gambling has a significant link to suicide and addition, which is often overlooked when you watch sports and you are bombarded with advertisements enticing you to gamble. It’s more accessible than ever before, with celebrated players endorsing gambling apps, shirt sponsorships and social media.

On this episode we were joined by YGAM’s Director of Programme Engagement, Kevin Clelland, Sam Starsmore YGAM’s Head of Delivery who is also a recovering gambling addict himself and former professional footballer, Marvin Sordell, who retired from the game for mental health reasons and has his own personal experiences of suicide.

Our second episode covers LGBTQ+ representation in sport. Diversity in sport is vital, especially within the LGBTQ+ community, seeing representation on and off the pitch gives LGBTQ+ fans the courage to be who they are, in the knowledge that they are accepted and can participate in sport.

It’s well known that toxic masculinity is incorporated into male football in particular, with homophobic chants, abuse to players and rival fans it can be detrimental to the wellbeing of players and fans.

For this episode we were joined by LGBT+ charity Stonewall’s Sports Programmes Manager and former international Lacrosse player for Wales, Erin Williams. Erin was the first player to wear rainbow laces in The European Championships in 2015 and The World Cup in 2017. We are also joined by Hannah-Lily Lanyon from Goal Diggers FC, an inclusive football club for women and non-binary people in London.

Racism was a hugely important episode for us to cover in the Extra Time series, racism is unfortunately across every sport and society. England Cricketer Azeem Rafiq said that it led him to experience thoughts of suicide; and Anton Ferdinand has spoken out about the suicide risk for footballers on the receiving end of racist abuse.

For this episode we are delighted to be joined by Nilesh Chauhan the founder of Aston Villa FC’s Villans Together – the equality group which encourages ethnic communities to take an interest in football; Anita Beedan who is a racism educator at Show Racism the Red Card, the UK’s leading anti-racism charity; and former Team GB athlete Anyika Onuora, who has recently shared her experiences of racism in the world of sport which contributed to her attempting to take her own life.

Episodes will air weekly across August, with the first episode launching on Wednesday 17 August. Listen on all the major podcast streaming platforms.

The video highlights from each episode will be available to watch on our YouTube channel.

Make sure you follow PAPYRUS on all social media platforms for the latest on the Extra Time series.